Cardedu is the youngest municipality of Ogliastra arose after the great flood that swept through the village of Gairo in 1951. The origins of its name derived from the plant of the thistle of which this land was rich. The territory has always been considered important from a strategic perspective since it served as a connection between the North and South coasts, set in a naturalistic landscape of incredible beauty.

It is the natuaral continuation of Torre di Barì beach. The long beach is separated from a lake area formed by the stream of Rio Bau Eni and from the internal countryside, embellished by a pinewood and eucalyptus trees. Further south, the coastline takes the name of Tramalizia, Marina diCardedu, Perd’e pera.

The long coastline consists of two coast typologies: the first, long and very white beaches, the other pebbles and gravel beaches; the red porphyry cliffs that fall into the sea are alternated by unique, quiet and isolated coves. The sandy beach extends for about 4.5 kilometers in which enchanting beaches come in succession such as Foddini, Museddu and Perd’e Pera. With south winds between 10 and 15 knots, it is a popular destination for many surfers as well as being rich in various natural attractions, especially in mountain areas it is possible to enjoy magnificent views that stand out across the horizon. Surrounded by over 2000 hectares of Mediterranean scrub and old woods, the Marina di Cardedu offers the possibility of unforgettable excursions to discover the many animal and plant species in the area for its peculiarities of flora and fauna.

The territory of Cardedu offers several archaeological sites including Nuraghi, Domus de Janasand a sacred well located in the locality of Cucuddadas called “Su Presoneddu”. The well, dating back to the Bronze Age was built (as all nuragic wells in Sardinia) to the water-worship, a fundamental element of their religion. In this area there is also an ancient rural church of the Madonna di Buon Cammino, where the third Sunday of September is celebrated the feast in his honor, a very suggestive experience to live with Luxury Holidays in Sardinia the holiday you’ve always dreamed of !

The white beach of Foddini, located on the border with the territory of Barisardo, is made very special thanks to the presence of a small pond. Exposed to intense and frequent south winds is particularly sought after by kite surfing and windsurfing lovers who can delight it in the most varied and daring stunts. The beach of Foddini is separated from the other beaches by a rocky ridge that descends into the sea called “La Scogliera” (The Cliff)

Following this beach there is the beach of Museddu, several kilometers long, with a light-colored coarse sand mixed with gravel. The light effects created by the sun reflected on the seabed make the waters transparent and of a pale blue color with a thousand shades. Another wonderful chromaticism it is created by the Mediterranean vegetation hemming the entire beach. The wide beach allows carefree walks on foot or horseback and the frequent sirocco attracts many surfers as well as underwater fishing lovers. Museddu, is characterized by rather deep seabed that requires a special attention with regard to the children playing in the water. The beach also has many facilities and nearby it is possible to find several clubs which animate the nightlife.

The beach Perd’e Pera is within walking distance of Museddu, and it is also characterized by rather deep seabed. Perd’e Pera has several dining options and clubs for the nightlife in the area. Being windblown by sirocco is the ideal destination especially for surfers and underwater fishing enthusiasts.

Proceeding, the vast sandy coastline almost disappears entirely to give space to a wide pebble beach very quaint, the beach Lispedda which takes its name from the mouth of the Rio Lispeddathat flows through the rocky coast, creating a small lake. The beach has a small parking lot, and it is very popular with underwater fishing fans who can admire in the seabed the unique flora and fauna which literally leaves speechless. This eastern coast of Sardinia still has an old charm with very particular primitive aspect done by mountains which go down into the sea with wild and rugged cliffs alternating with fabulous and unique beaches.

The territory of Cardedu is characterized by a predominantly agricultural area that offers the commodities that enrich the local cuisine. The entire Marina di Cardedu can be considered a real paradise where time seems to have stopped, and wilderness inebriates the senses with its beauty and its intense perfumes and flavors. 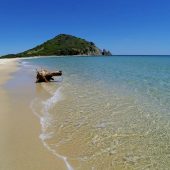 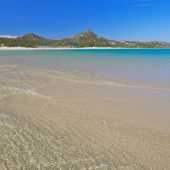