The beach of Solanas

The beach of Solanas is one of the largest beach on the south-east coast.

The whiteness of the sand and the clearness of the water can be appreciated also from the top view, that is to say from the west side of the promontory of Capo Boi.

To reach it, take the coast road and after about one kilometer, from the bend right on the shoulder of the promontory, take the dirt road visible on the right. This road goes right around the cape but is accessible easily by car only on the east side. Therefore is better to walk to admire the beach of Solanas. On the opposite side of Capo Boi the picturesque Cala Pisanu opens out.

This long beach is named after the Solanas river and is characterized by coarse-grained, cream-coloured sand.

It has crystal clear shallow waters and a sandy seabed.

It is set between Capo Boi and Punta Portu Perdoso, two promontories overlooking the sea, covered by Mediterranean maquis where it is possible to go on excursions to enjoy the breathtaking view.

Towards, the granite east coast rises and opposes the sea with a 40 meters high, which allows only infrequently accesses: the beach of Solanas fits into this context, located in the mouth of some rivers such as the chennels of Portu Perdosu.

Follows the promontory rich of greenery, overlooking the sea with a rugged and high rocky edge that closes to the west there is the magnificent bay of Solanas, in which in the eastern part born the river Solanas, which runs under the Monte Turri river bed.

This descends from the mountains of Sette Fratelli, and has built a small alluvial plain between the hills of modest height but wild-looking.

On the edge of the plain, there is the beautiful sandy beach of Solanas fueled by abundant quartz material from the river which, for most of the year is characterized by a considerable load of debris.

At the rear lies the small village of Solanas that looks like a typical village, perfectly placed in the valley, and very welcoming and with all the necessary facilities.

Thanks to the large variety of facilities offered it is recommended to families with children.

Due to its wind exposure and to its underwater streams, the beach attracts windsurfing enthusiasts. 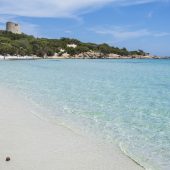